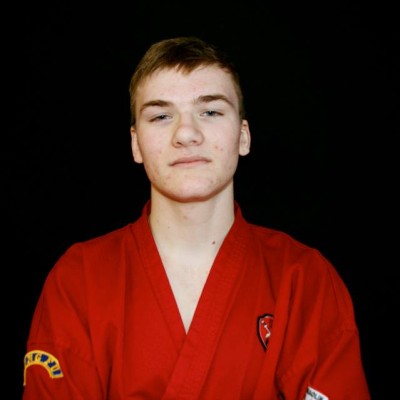 At fourteen years of age, I was labeled a “troubled kid” with PTSD and explosive disorder. My bad past did nothing but fuel the fire. After getting in trouble at school one day, I wandered downtown looking for a place to do community service.

That was when I met Cosmo Zimik. He was sweeping outside the old gym on 11th Ave. South. As I walked by he said, “Hey! Do you want to learn how to be a fighter?”

Always interested in martial arts, I jumped at the opportunity.

He told me to come back the next day to tryout.

As I was walking home, I realized I had no means of paying him to train. I came the next day to tell him I had no money. When I arrived, he was teaching a muay thai class how to kick. I remember thinking “Wow! His kicks are so cool looking. I want to be able to do that.”

I waited until he finished teaching and told him I couldn’t pay. He told me that was fine and sent me to learn how to punch the bag from his assistant. Before I left, I shook Cosmo’s hand, and he told me to come back the next day.

After awhile it occurred to me that Cosmo didn’t care about money, he just wanted to help me. I had never experienced that kind of mentorship. To this day Cosmo has truly been like a father to me. In return for my unspoken free membership to Empty Hand Combat (EHC), I helped with things like cleaning and training the little ones and other kids in the at risk youth program.

I found that martial arts came naturally to me, almost as natural as breathing. Being at EHC also taught me I had meaning. I became a Christian within three months and stopped getting angry and having flashbacks. I didn’t get into trouble because I respected Cosmo too much and didn’t have the time anyways.

Two years later, I received my GED from a program in Timberlake Job Corps. I even earned a college scholarship due to scoring in the top 10% in the nation. Now I’m looking into attending college.

If I met someone today standing in the same place I had been before meeting Cosmo, I would tell them anything is possible through hard work and dedication. I would tell them they have to make a change for the better. Not for me or anyone else, but for them. I’m proof it is possible.

*For an informational video of Empty Hand Combat, including some of Jay’s testimony, go here: https://www.youtube.com/watch?v=2TEv6mLlqzI